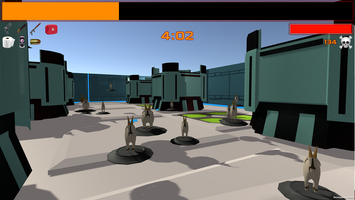 The streams have ended. The giveaways have been gifted. The smoke has cleared. TOJam has wrapped up for another year. Huzzah! I hope everyone who participated had a great time.

To cap things off I'm going to do a little reflection on the jam. But before dwelling on the past, let's discuss the future!

The first patch will be small and address items I wanted to deal with during the jam but couldn't for lack of time. Ideally I'd like to do this before the end of the week but we'll see if it's doable.

Alien Survivors: The Game: The Idea

I felt like coming up with an idea for a game was more difficult this year than in previous years. Partially, I feel that's because I didn't have other people to brainstorm with. People look at me funny if I try to have a conversation with myself.

Seriously, though. I'd been thinking what games I've enjoyed lately and one stood out. I have 50 hours playing it recorded on Steam. It cost three dollars. And I learned about it from watching a livestream hosted by a certain priestess of the Ancient Ones. It's Vampire Survivors! It's actually available here on Itch too, not just on Steam. I'm sure everyone already familiar with Vampire Survivors is saying "no DUH" seeing the title, UI design and mechanics.

How it all Went Down

Like previous game jams where I had time to think beforehand I wrote out a schedule of what I wanted to do each day. I also bashed out a very rough outline of how the core mechanics would work. For the most part everything went smoothly though things did take slightly longer than planned. However the game ended up coming down to the wire for submission. I'm very happy with the final result but, as always, things didn't go perfectly.

Having a plan. Because I knew what I wanted to make from the start I was able to develop without stopping to figure out what I needed to make next

Scheduling was a big problem. Both Day 2 and Day 3 had huge parts of the day where I was unable to participate in the jam because of conflicting appointments. I would estimate that I had about 48 hours of good working time available to do the game and lost about 6 hours to other needs.

The other big problem was a lack of response from floaters. In TOJam floaters are various artists, musicians etc who volunteer to help with other teams' projects and fill in skill gaps that smaller groups may have. To get a floater you put up a request on Discord and a floater responds to collaborate. Or, that's how it's supposed to go. In my case I put up one ticket for some 3D art and one for a song. The song ticket got picked up but with no further response. The modelling ticket got bupiks.

I was able to handle the lack of a song by grabbing some CC-BY-SA (I believe) music I had on hand. Art was much more difficult and a big part of Day 3 was spent madly scouring Sketchfab to find something suitable.

Not really anything to say that I haven't already said. It's been another great year with a strong sense of camaraderie  and I'm happy to be able to participate. Looking forward to next year!

Use your wits and a bit of luck to survive against the teeming hordes of alien monstrosities. And some goats.